Children between the ages two and 11 spend an average of one full day per week watching television. This is a very familiar scenario in many Indian homes today. With both parents away at work, in the urban, middle class families this trend is very common. Even when parents are at home, watching television is still the favoured family pastime. Research shows that on an average, a typical Indian household has the television set turned on for about seven hours each day. Kids and teenagers between six to 17 watch three to four hours of television a day. Watching television is a passive event. Children and adults remain completely immobile while viewing televisions. Most of these viewing experiences are quiet and non – interactive. Children absorb millions of images from the television set depending upon his choices. 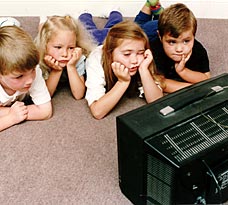 What are the guidelines for watching TV?
Here are some of the guidelines to help you judge what kind of programmes will be beneficial for your children.
Television is fine when it deals with:
>Promotion of creativity and critical thinking
>Engages children to think and ask questions
>Encourages positive behaviours
>Encourages your child to read
>Reinforces the values that are important to you
>Inspires them to learn more
>Helps them to appreciate other cultures
>Entertains your children
Television is a problem when:
>Exposes children to violence as a means of problem solving
>Occupies too much of your their time
>Introduces subject matter that is not appropriate for children
>Allures children to buy different products
>It might promote negative behaviours
Can TV be a worthwhile teacher?
Moderate amounts of television viewing may be beneficial for the child, depending entirely on the type of programmes the child is watching, and the kind of supervision they are getting from their parents. Television can teach a child about the world and about people that they may not have access to. There are quite a few interesting as well as very informative programmes on television. A well – guided television viewing increases the general vocabulary of the child, provides the opportunities for them to learn about all kinds of things, which helps them in making choices regarding the area of interest. They get exposure to a wide range of activities that they may not get a chance to encounter. Television is probably the most effective of all media that aims to create social awareness.
Some tips for balanced viewing:
>Work together to keep a time chart of your child’s activities, including television viewing, homework, and play with friends. Then discuss what you believe to be a balanced set of activities.
>Set a weekly viewing limit. At the beginning of the week have your child select programmes you approve fit for watching.
>Encourage planned viewing. Have programme choices in mind before turning the set on so that it does not hamper their studies.
>Remember that children learn from their parents. If you watch a lot of television, the chances are that your child will also develop the same habit.
>If you want to improve the quality, look for the programmes that are designed for your child’s age group.
>It is very important to balance entertainment with other activities for the all round development of your child.
How is television linked to violence?
The risk of viewing any form of violence on television is that the child learns to behave in a violent manner. However viewing television violence does not necessarily cause a child to act in a violent manner, but can contribute to promoting a view that violence is common and acceptable in everyday life.Research done study the effects of brutality in television programmeson aggression in children, showed that the group of children who were exposed to violent television programmes exhibited a noticeably greater degree of aggression towards their toys and other children. On the other hand, the group that was not allowed to watch violent programmes displayed less aggression.
What should parents do?
It is important that parents limit the hours that a child watches television, besides censoring what he watches. Television should not be allowed to interfere with meal times and sleeping hours. Parents should work out a timetable for watching television with their children. This should reduce the need for parents to constantly nag their children about watching television.Television need not be viewed solely as a negative force. It has its advantages. Even if a child is watching a good educational programme, he will not learn as much if he is watching alone. If he is watching with another child or an adult who makes comments or asks questions about the programme, this will help the child to develop new ideas. Children who are interested in a particular programme may be motivated to read more about the subject of these programmes or question adults about it.Parents have to resign themselves to the fact that television is here to stay. So they just have to learn to deal with the problem.
19
29
8
9
11
8